Retro gaming on Raspberry Pi is starting to be a crowded market: Recalbox, Retropie, Lakka, and others all offer almost the same thing
A few months ago, I heard about a new competitor: Batocera
I have tested it today, and I share with you here what I have learned

How to install Batocera on Raspberry Pi 4?
Batocera is a recent retro gaming solution, based on Recalbox
It’s available on PC but also on most single board computers (including Raspberry Pi)
You can find an image on their website and install it on a SD card with Etcher for example

So, the installation part is almost like any other distribution but I will also tell you their origins and give you a few tips to get started quickly with Batocera

As I already told you, Batocera is a retro gaming solution based on Recalbox
So, it’s also a potential alternative to Retropie and Lakka for example

The project started in 2016 as a fork of Recalbox with former Recalbox developers
The reasons and goals are unclear for me, but I suppose that it’s a difference of opinions on the future of the distribution

As the project is still young, there is no major differences between both for now
You can check the Batocera changelog here, but there is no “major project” that they put first that could explain the reason of this fork
However, they released many fixs and upgrades that add more compatibility for hardware and software

I read in a few forums that performance are often better on Batocera, and that more components are recognized directly by the systems
So, you probably need to try it and compare. It may be better for some of you, but most people won’t see any difference.

If you don’t know what is Recalbox, you can find my complete guide on Recalbox here

So, it’s good news as we want to play games on it, but a bit late compared to some other competitors
Releasing a compatible version 6 months before Retropie would probably have helped them to become more popular

Anyway, let’s jump to the installation (on Raspberry Pi 4 by the way)

An image of Batocera is available directly on this page
Scroll down and find your Raspberry Pi model
It’s also compatible for Odroid, Tinkerboard and Rockchip boards if you are in this case

You’ll get a file with a .img.gz extension, there is no need to extract it
Just follow these steps to create your SD card :

A few seconds later, your SD card is ready to use

Insert the SD card into the Raspberry Pi and start it
After a few automated steps, you should arrive directly in EmulationStation

If you already played with Retropie or Recalbox, you shouldn’t be lost here
But there are a few differences, so I will give you the first steps to get started with your device configuration

For example, there is no “Configuration” screen like in Retropie, but there are the “Favorites” and “All games” submenus
Also, there are a few games already available as demo content

If you have a controller plugged, Batocera will not ask you to configure it directly on first boot
You’ll get the configuration wizard only once you press a button

You can now press “Start” to access the main menu
If you don’t have a controller yet, you can use the “Space” key on your keyboard (and directly check my recommended product page to find one because playing these games with a keyboard is boring ^^)

Anyway, once in the main menu, click “Network settings” to configure anything you need about this

If you are using an Ethernet cable on a network with a DHCP server, it should already be OK
If you want to use Wi-Fi or change something, you can do it here

For the Wi-Fi, you need to first enable it
Then you can select your SSID in the list and enter your passphrase

Once connected, take note of the IP address. You’ll need it later to copy games to the Raspberry Pi

As I told you, there is no Configuration menu in the systems list, no Retropie script or anything you can be used to with other systems
Everything is included in this main menu (and it’s a good idea, I think)

As you just installed it there is no update available, but for information this menu allows you to manually start software updates (Main Menu > Updates & Downloads)

You can also download themes directly here, which is very interesting 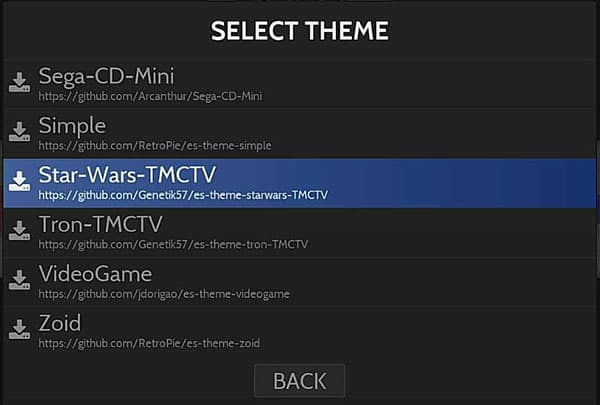 Once selected, your download progress appears in overlay in the top right of the screen

The UI Settings submenu allows you to configure everything concerning EmulationStation

For example, if you downloaded a theme in the previous part, you can select it here
Once selected, Batocera will reload and display your new theme

For the other settings, the interface is very intuitive, so you should find everything by browsing in each submenu
For example, if you want to use a Bluetooth controller, you can pair it in the “Controllers settings” submenu

If you want to use SSH or SFTP, SSH is enabled by default so you can use it directly
The default login is “root” and default password is “linux”

As you may have already noted, Kodi is pre-installed on Batocera, so you can use it directly from the main menu
Kodi is a media center tool that you can use to watch movies on the same device (more details here)

If you are new to retro gaming on Raspberry Pi, the first step to play games is always to download them
I already have a tutorial that explain everything here, so I let you check it if you need some help about this

Games files are the same on any system, so don’t look specifically for Batocera ROMs
If you have no idea what to try, you can check my 12 favorites games here

The game installation is almost the same as with any other retro gaming system
A network share is available directly after the installation, so I suggest using it :

Once your game on the SD card, you need to reload EmulationStation to refresh the game menus
You can restart the system completely or use this option:

From here, just press B to start the game 🙂

Note: the scraper seems to work directly with the default settings (at least for the games I tested), which is not the case with most of the other alternatives. So, good point for this

That’s it for this quick overview of Batocera on Raspberry Pi
For now, the system doesn’t offer many new things compared to Recalbox or even Retropie
But it’s probably a project we need to follow, if they build a team with the most motivated elements from Recalbox, the difference may increase quickly between both projects

If retro gaming is a topic you are interested in, you’ll find many topics on this website, for example :

And as always, if you have any question or anything to add, feel free to leave a comment below 🙂

2 thoughts on “Batocera on Raspberry Pi 4: Installation and First Steps”

One of the best features of the Raspberry Pi is that you can add extensions to enhance its capabilities.When you buy a Raspberry Pi, you only get the minimum required to make it work.And then you...

Finding a good text editor available on Raspberry Pi is not easy. Most applications are not released for the ARM architecture.So, well-known apps like Sublime Text or Atom can't be used.But I have...

Hi, I'm Patrick. I am a Linux system administrator, and I am passionate about the Raspberry Pi and all projects on this topic.
I created this site to share with you what I learned about it.
About Page

From beginner to expert in Raspberry Pi.
Available in Kindle and Paperback formats