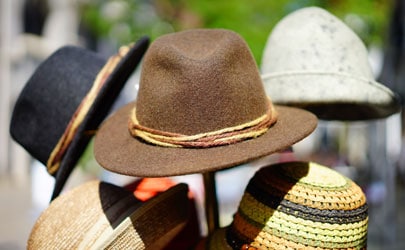 One of the best features of the Raspberry Pi is the possibility of adding extensions to enhance its capabilities
When you buy a Raspberry Pi, you get only the minimum required to make it work
And then you can add additional cards to do what you want with it

So in this article, you’ll get the 13 best extensions you can offer to your Raspberry Pi
At the end of the reading, you should have tons of projects ideas to build with these Raspberry Pi HATs

We often use the term HAT to defined a Raspberry Pi extension
It’s not only for the first meaning, but it stands for “Hardware Attached on Top”

In short it’s an additional card, that you plug on the top of your Raspberry Pi to bring new features
Generally, it uses the GPIO ports to connect the two cards together

Don’t panic, the assembly is easy.
It requires no soldering, so you can plug and unplug it when you want
And even better, the installation is most of the time automatic.
The Raspberry Pi will recognize the HAT thanks to an EEPROM module on the board that identifies the HAT model

So don’t be afraid to use HAT with your Raspberry Pi, it’s really easy, and close to an additional PCI cards on your computer
Just plug it, maybe install one thing, and it’s ready to use
You don’t need to be an experimented handyman to play with these toys 🙂

It’s time to browse into my selection of the best HATs for Raspberry Pi
There is no specific order, all of them are good and for different purposes, so it’s not possible to make a ranking

The Sense HAT is the one you absolutely need to try
It’s a bestseller, with a lot of reviews, tests and publications

The sense HAT provides a lot of new sensors to the Raspberry Pi:

The Raspberry Pi Foundation created this HAT originally for the Astro Pi project, to send Raspberry Pi to space and measure everything we can
But even on earth, it’s possible to make a lot of projects with this extension (educational at least)

If you want one, you can click on the image to find it on Amazon

The Automation HAT from Pimoroni is also a must have in this listing
It’s a monitoring and automation board, you can plug to your Raspberry Pi to add a lot of features

With relays, analog channels, powered outputs and buffered inputs you can bring a lot of extensions to your basic Raspberry Pi

It’s available for all Raspberry Pi models, including the Pi Zero
Check the price on Amazon if you want to try it

With a funny name, the Pimoroni Unicorn brings a 64 LED matrix display to decorate your Raspberry Pi
It also comes with a Python library to code the light as you want

On the image, you can see the basic model rendering in the dark
But there is also a HD model with more LEDs (256 I think)

This HAT opens to you any kind of project, from a basic but fun light test, to an awakening dawn simulator.

The Adafruit Servo board allows you to connect up to 16 Servo motors to your Raspberry Pi
I call this HAT the “Arduino adapter”, because it makes the difference between a Raspberry Pi and an Arduino

The main Arduino strength is to be good in a complex electronic circuit, to manage physical devices like buttons and motors
But the Raspberry Pi is better being the brain, not the hand.
This extension allows the Raspberry Pi to take both roles

If you are interested by this topic, check my post about “Why Raspberry Pi is better than Arduino?” 🙂

Meanwhile, if you want to build projects with motors in the future, I highly recommend trying this extension (click on the image link to see the current price)

The pHat Beat from Pimoroni is the ultimate hat you need to have for sound projects
It improves the sound quality of the Raspberry Pi and brings other new features like:

Once the software installed, you will be able to manage the audio settings directly through ALSA from your operating system
They also provide the VU meter plugin to display it without coding anything
But you can program it with Python if you prefer

The extension is available on the Pimoroni website directly (I didn’t find it on Amazon), with optional accessories like a diffuser or a speaker

This one is again a Pimoroni extension (they are active in the HAT market for Raspberry Pi and produce good hardware components)
The Enviro pHat is for the Raspberry Pi Zero and you need to solder it to the GPIO pins before using it, so maybe it’s not the first one to try in this list

The Enviro extension add these sensors to your Raspberry Pi Zero:

It also comes with 2 lights and an analog-to-digital sensor
Once installed, a Python library is available to build your projects easily

This HAT is available on Amazon
I recommend it for projects with a Raspberry Pi Zero, but if you are using another model, I think the Sense HAT (first on this list) will do a better job, because you have additional sensors and don’t need to solder it

I like this one, because it’s funny.
The Adafruit Capacitive Touch HAT add 12 capacitive sensors to your Raspberry Pi projects

And as I’ll never be able to explain you what it is better than this video, I’ll show you:

You’ll find all the details on Amazon 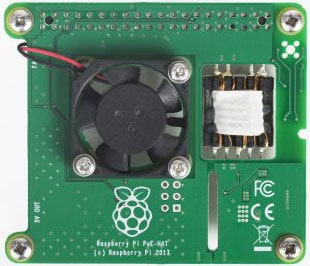 PoE stands for “Power over Ethernet” and allows you to power devices like phones without additional power source
With this HAT on your Raspberry Pi and a PoE switch (check this one on Amazon if you want to try it), you can remove the power supply
It’s awesome because you only need an ethernet socket  somewhere to put your Raspberry Pi on it

There is no additional RJ45 port on this HAT, it’ll use the default one and collect the electricity from it to run your Raspberry Pi
This HAT is available on Amazon (click on the image) or on the official Raspberry Pi website

The installation on your Raspberry Pi is easy, you just need to install a new Raspbian package: tvheadend

This extension is available for purchase on the Raspberry Pi website

This extension board goes on a Raspberry Pi (A or B) and allows you to plug until four Raspberry Pi Zero on its back, to build a big cluster

If you’re interested in this project, you can find the Cluster Hat on the website with the same name here

We saw a lot of HATs that add a new feature to use it in code or with a specific software
This one doesn’t, but it’s awesome

It’s available on Amazon if you want to try, you don’t need to solder anything to use it

I kept the best one for the end 🙂
It’s not really a HAT but a complete kit including a HAT, so it’s ok to have it in this list 🙂

The Robot Car Kit provides you all the components to build a Robot Car easily
There are severals models available on Amazon, I’ll let you choose the one you want, depending on your taste and budget

The car includes a camera on the front and you can control it from your smartphone (via WiFi)
It seems really fun and you can go further!
The line follower module and the other sensors allow you to create your own smart car
And obviously you can add more modules later using this chassis

Unfortunately, I didn’t find a demo video, so feel free to share it with us if you buy one 🙂

What’s the difference between HAT and pHAT? A HAT has the Raspberry PI A/B size and respects some guidelines given by the Raspberry Pi Foundation (like the mandatory EEPROM module to install it easily). A pHAT is generally the equivalent for a Raspberry Pi Zero, with no specific rules from the Foundation

How to use the HAT capacities in a Python script? I can’t give you the detailed information for any HAT of the market. But you’ll find in the product documentation how to do this. Generally, there is a specific library for you HAT. For example, for the Sense HAT, you need to install the sense-hat package with apt and then use the library in your script: from sense_hat import SenseHat

That’s it, this is the end of my favorite HATs for Raspberry Pi
There is a lot more available on the market, I can’t show all of them, but you have here the best ones

I hope this article gives you some ideas for your future projects
Let me know if you already have some of them, or if there are other good ones you want to share with us