Chrome OS is the operating system created by Google, and used on their Chromebook devices. You can’t install it directly on other devices, but an open-source version is available : Chromium OS.
As for the browser, Chromium OS can be installed on Raspberry Pi, and I will show you how in this tutorial.

How to Install Chromium OS on Raspberry Pi?
The Chromium OS developers are supporting Raspberry Pi users with a specific GitHub project for the single-board computer.
A new version is released frequently for Raspberry Pi 3 and 4, with updates and bug fixes.

Thanks to this work of the developer team, the installation is straightforward.
I will explain everything to you, step-by-step, but also show you how to upgrade this light system into something you can really use as your main system.
Let’s go!

What is Chromium OS?

As I started in introduction, Chromium OS is an open-source system created by Google, that you can use for free, as a Linux distribution.

Google took some bricks of Linux, like the kernel and Portage to manage packages (as on Gentoo), but the main goal is to use all the Chromium apps from the browser in a more classic computer system.

Yes, when you think about it, once you have all the websites and apps from Google (Google Docs, YouTube, Hangouts, Gmail, etc.), you have almost everything you need for a desktop computer.
It’s a new way to use a system, with everything in the cloud, but it should be interesting to try (I never had a Chromebook before for information, so it’s new for me at least ^^).

Before going further, we need to clarify one point directly.
As for Google Chrome and Chromium browsers, there are two versions of this operating system: Chrome OS and Chromium OS.
What’s the difference?

Google Chrome OS in the product that Google install on Chromebooks (for information, Chromebook is the brand of computers that run Chrome OS, often cheaper and less powerful models than the Windows version, here are some examples on Amazon).

The Chromium OS is the open-source version, a development version, mainly used by developers directly. You can view the source code on their GitHub project, and download an image to test it on any device.

So the difference for the user is small, but I’ll use Chromium OS all the time now because I’m talking about the open-source version.

As you might see this name on GitHub, I will explain directly.
FydeOS (previously known as Flint OS), is the name of the Chinese team that is working on Chromium OS.
So all the repositories are named like this because it’s the name of the developers.

It’s not a big question for us. If you want you can look at their website to get more details about the exact differences between everything, but the idea is that it’s the best way for us to download a Chromium OS image, pre-made for Raspberry Pi.

Why would you use Chromium OS on Raspberry Pi?

The Chromium OS is a pretty lightweight operating system. As everything is in the cloud, usage of local resources should be limited.
Also, speed is a core value for Chrome OS, as it is for Google Chrome, so developers are particularly attentive to think about this while adding new features.

In theory, Chrome OS is also intended for entry-level computers, has its main users are those who are mostly using a computer to do things on the Internet, they don’t have the latest generation computer. Chromebooks are also shipped with low-end processors, so the Raspberry Pi should be ok with this.

In a real usage, Chromium OS can have some peaks in the CPU usage depending on what you are doing (as on Google Chrome, more tabs and more apps can slow it a bit). But the difference with another OS is that all the Raspberry Pi power is reserved to Chromium, so it should be ok, especially on Raspberry Pi 4.

Let’s see now how to install it on your Raspberry Pi.

As I told you previously, the easiest way to try Chromium OS on the Raspberry Pi is to download FydeOS from the GitHub repository.
New releases are available regularly for Raspberry Pi 3B / 3B+ and 4.

Then, the process is almost the same as with any operating system :

A few minutes later, your SD card is ready to use, and you can insert it in your Raspberry Pi.

On the first boot, Chromium OS should start directly, and a setup wizard will ask you a few questions to configure your device :

As I already tried Chromium OS before, my settings and apps are automatically installed on this fresh installation, which is pretty cool.

Tips to Use Chromium OS

Ok, so if you are new to this, let’s start with the basics.
The Chromium OS desktop is a bit different from what you might be used to.

The desktop is empty and will stay like this.
On the bottom left, you have a circle icon that open the shelf with the latest used apps shortcuts.
You can change the position of the self with a right click on the desktop (and put it on the left for example, like on Ubuntu).

If you want to see all installed apps, you need to click on the “up arrow icon”, or unroll the menu with a drag and drop.
From here you can do a left click on any icon to start the app, or a right click to pin it to the shelf for fast access from the desktop.
If you have many apps, the search engine can help you find an app.
Note: there might be several pages, even if the pages are not full, make sure to click on the dots on the right to see the following pages.

On the bottom right of the screen, there is the clock. But a click on it will give you quick access to a few actions:

Ok, so there are not many things to configure on Chromium OS, but still there is a configuration app to do the basic stuff.
You can find the “Settings” icon in your apps.
Basically, it’s the same presentation as in Google Chrome settings, with a bit more things as you also configure the computer from here.

All settings are divided into a few categories, so it’s fairly intuitive to find the configuration you want :

That’s pretty basic, but it should be ok to customize your system a bit.
You can also open the Advanced menu to have access to more things.

Chromium OS is installed with almost zero apps by default.
You have to install everything you want after the system installation.

To do this, find and open the Web Store in the shelf.
Then, you can install all apps from the Chrome Web Store, so you have a bit of choice here 🙂 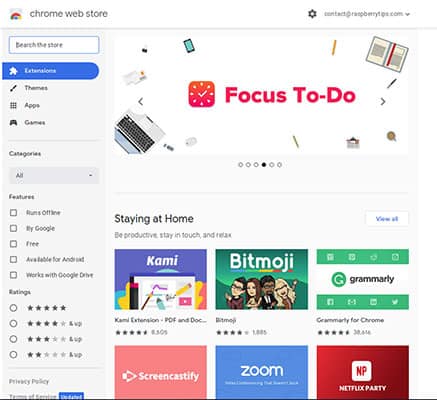 For information, the difference between an app and an extension is that an extension is installed only in the Chromium browser, while the app is available in the shelf as a standalone program (even if it runs in Chromium most of the time).

If you want to try one, I have found the “Cog” app to display the system usage in real time that works very well: 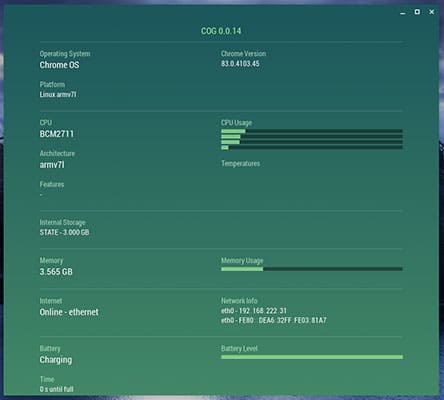 But I mainly recommend installing all the apps from Google you need, to take a good start with Chromium OS.
You can also try good apps like Zoom and Caret, tools to open MS Office documents or PDF, etc.

Some of you may still be skeptical about using this system as your main one.
So, I just wanted to show you that some cool things are possible. For example, you can still use a printer on a cloud operating system.

If your printer is detected automatically on the network by the Chromium printing tool, there is nothing to do, you can use it directly.
If not, follow this procedure to configure it manually:

If you prefer the video format, here is the corresponding one on YouTube:

To receive all the new videos directly in your feed, just click the button here:

That’s it, you now know a bit more about Chromium OS, how to install it on Raspberry Pi and how to get started with the first few things to do after the installation.

I hope this post was useful for you, and feel free to share with us your results if you use it as your main operating system (or try at least).

link to How to Install an Email Server on your Raspberry Pi?

There are many projects where you need to be able to send emails, but creating a mail server can also be a project in its own.So, we will see the different steps of setting up a web server, be it a...

Continue Reading
link to How to Install and Use Python Packages on Raspberry Pi?

Python is already installed on Raspberry Pi, but using it to create scripts and build various projects will often require some dependencies named libraries or modules. Even if you are good with...

Sale: 10% off today.
Download the eBook.
Uncover the secrets of the Raspberry Pi in a 30 days challenge.