Kano OS is an original operating system, intended for kids usage.
Based on Raspberry Pi OS, it works well on Raspberry Pi, even if their main goal is to sell full computer kits.
In this post, I’ll give you more details about this system, show you how to install it and how to try it easily with your kids.

How to Install Kano OS on Raspberry Pi?
Kano OS is a specific system, entirely designed for children from 6 years old and above.
As it is based on Raspberry Pi OS, it is possible to install the system on a Raspberry Pi and start teaching code or computing in general at an earlier age.

As often on this website, I will start by a more in-depth introduction about Kano. Then I’ll show you how to install it on your Raspberry Pi, and finally use some great tools included.

Kano is an American company, created in 2013 after a successful campaign on Kickstarter.
They got a help of $1,522,160 at the end of the campaign, that helped them to get started with their first product (the Kano Computer Kit).

The idea was to allow anyone to build their computer, based on Raspberry Pi, to make technology more accessible and understandable.
They also developed a specific operating system for this kit, based on Raspbian, that can be easier to understand for younger users.

Today, their main focus is still on creating new products, improving the operating system and developing new apps.
Sadly, their last products are not running on Raspberry Pi, so we don’t know how much time it will be available for us.
Here is a picture of the latest one, released in summer 2020:

Anyway, you can still find the Kano Computer Kit, based on Raspberry Pi 3, on Amazon (link here), but it’s no longer available on the official store. It has been replaced by this Microsoft product.
Even if the goal is the same, I’m not sure you’ll like this information 🙂

Our main goal today is to take a look at their operating system, that is very interesting, whatever you are using their computer kit or not.
The system is based on Raspbian Stretch, and has a wonderful interface for children:

I’ll explain everything in the installation part, but if you have kids that are interested in screens, it’s the perfect operating system for you.

As I told you, the latest developments are not really made for Raspberry Pi. I don’t know if there have plans to get back to it with the Raspberry Pi 4, but for now, the system is still on Raspbian Stretch.

That’s why, it will not work on Raspberry Pi 4 for the moment, you need to have a Raspberry Pi 3 B+ or older to run it.

As we have seen, Kano OS is not the main product available on the official website, so you have to search a bit before finding it.
Here is the step-by-step procedure:

You now have an image to flash on your SD card.
I recommend at least a 16GB Micro SD Card (check my recommendations here).
You can also find

The preparation is the same as with any operating system:

Wait a few minutes for the tool to complete the copy.
You can now insert your SD card in your Raspberry Pi.

On first boot, you’ll get a strange command prompt, asking you to type a random command:
cd rabbithole
Do this and press ENTER.

Then follow the cool wizard to configure your session:

After a few other questions, you should be able to access the desktop, with the network configured.
You can create a Kano account, but it’s not mandatory if you are just testing the system.

In theory, your system configuration should be almost done at this point.
But if you need to configure something else, you can go to the settings.
You can find the icon on the desktop, on the right / bottom.

From here, you can reconfigure everything:

For example, in my case I’ll change the keyboard settings to fit my hardware (will be easier to type code ^^).

The notifications can also be changed from here.
You can change the desktop background in “Style” for example, add another account for your other kids, etc.

In the advanced menu, you can adjust the parental block settings and enable SSH if you want to connect to it from another computer (use your username as login and “kano” as default password).
I let you customize everything you want here, and we’ll move to the Kano applications.
A reboot may be required to apply the changes.

Your first minutes with Kano OS

As Kano OS is very different from the other systems you may know, I’ll take a few minutes to introduce the main applications you can find on it after the installation.

Here is a complete list of what you’ll get after installing Kano OS on Raspberry Pi 3 (the latest version available during writing):

So, Kano is full of useful apps you can use to discover the Raspberry Pi or to learn in general (perfect for learning code for example).
In the default desktop, it’s not possible to run several apps simultaneously, but there is a classic mode where it’s possible (with a start menu and task bar like any standard operating system).

A few apps are hidden in the classic mode (I saw VNC for example) and Kano World allow you to install more apps and add-ons.
It’s not a Play Store or anything like that, but there are a few one you can download for a more generic usage (FileZilla, Wireshark, etc.).
And obviously, as it’s a Raspbian-based system, you can connect with SSH and use apt to install other apps and services.

Also, for information, each time you play a game or use specific apps, you can earn some XP and improve your character to another level.
Your current level is visible on the desktop (top/left), and you can also win some badges for specific actions.

After this overview, let’s zoom in on three interesting apps for beginners. 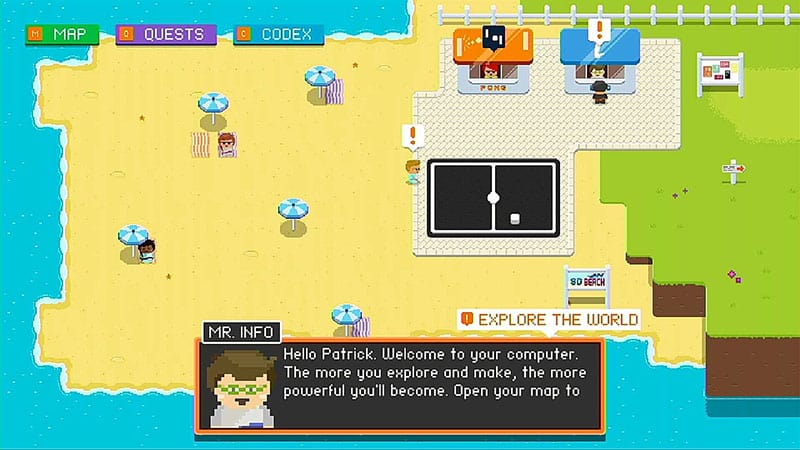 Story Mode is the perfect app to get started on Kano OS.
You’ll control your character through a map where you can meet interesting people. They will offer you to start a game or an app, ask you a question or give you a few tips about the computer in general.

The video explains everything if you want to get a better overview.
I think it should really work with kids from 6 years old or more. 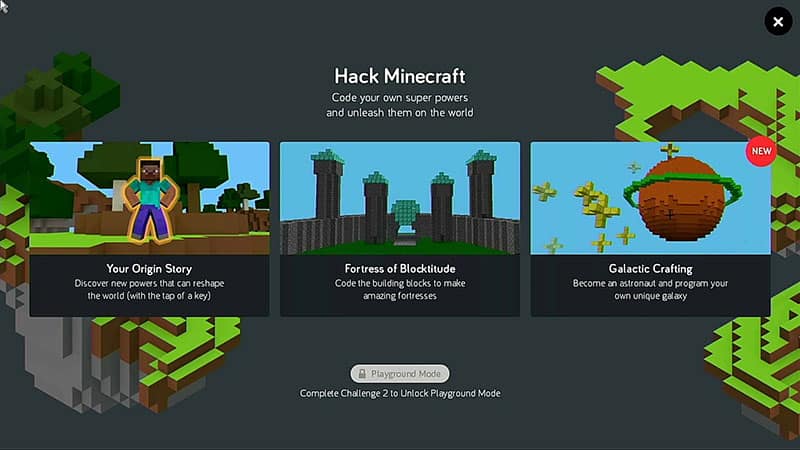 You probably already know Minecraft. It’s an open world game, where everything is made from cubes. Each block has different color and properties depending on the item it represents.
The game is really enjoyable even on a standard computer, and it’s the perfect game for kids in particular. There is very low violence compared to other game (and you can configure it), it teaches many things with the craft system where you build blocks from others.

It’s possible to code Minecraft in Python (check my post on the topic), but for younger kids it’s probably a bit complicated.
That’s why this app is perfect, as it use code in canvas like in Scratch for example.
You have several stories, where you are guided through a step-by-step process to build something, it’s really well done. I’ll let you discover it. 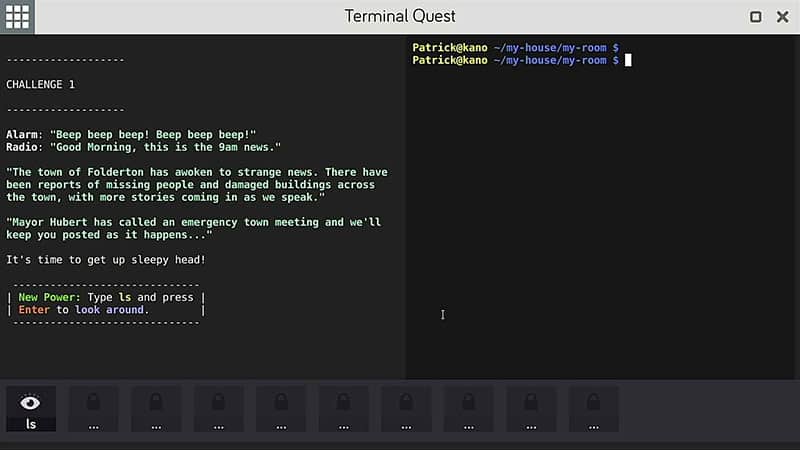 The last app I particularly like is Terminal Quest.
Learning Linux commands can be really difficult to learn and to remember.
But this app includes them in a story, with many details and hints for the command to use. And it’s always easier to remember new things when you remember a story simultaneously.

On the left of the screen, the story is playing. On the right, you have a terminal where you type the asked command.
Each time you succeed, you unlock a new command at the bottom of the screen.

By the way, I have an entire guide about the main Linux commands if you want to go further after that (or download my cheat sheet).

Subscribe to receive the new videos as soon as it’s available:

That’s it for this tutorial on how to install Kano OS on Raspberry Pi. I also gave you a pretty good overview of what you can expect when using this system.

I hope this subject was helpful or at least interesting if you don’t have kids.
I’m in this case but I really liked to write this tutorial, it’s very different from the other operating systems and I think it should be a good solution to discover computing, whatever the age of the user.
Let me know in the comments if you have more experience with it and maybe a few tips to share with other.

2 thoughts on “How to Install & Use Kano OS on Raspberry Pi? (Full Guide)”

link to Can you Use an iPad as a Raspberry Pi Monitor?

For most people, the Raspberry Pi operating system (whatever the one you use) will do this in the background, and it shouldn't be an issue.But in some cases, like if you are just getting started on...

Sale: 25% off today.
Download the eBook.
Uncover the secrets of the Raspberry Pi in a 30 days challenge.