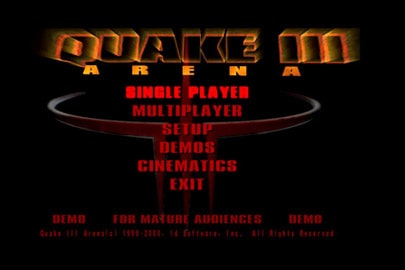 We often present the Raspberry Pi as an ideal machine for retro gaming, and if there is a game that I associate with retro gaming, it’s Quake 3.
Unfortunately, I didn’t find a complete step-by-step tutorial to install it, so I decided to make one now.

How to play Quake3 on a Raspberry Pi?
Quake 3 is a famous shooting game, which you can install easily on Raspberry Pi by searching quake3 in the package manager, or via apt-get or finally compiling it yourself from the sources of the game

I will now explain a little more in detail:

Quake 3 Arena is a first-person shooter that was one of the first to introduce bots in play, controlled by artificial intelligence.
This technology made the games much more interesting
The game takes place in a sci-fi universe with arenas up to 16 players per map, where everyone chooses a character
All players start with the same weapons (machine gun and gauntlet) but can find new weapons by moving on the map

Quake 3 offers several game modes: Solo vs. Bots, Local Gaming, and even multiplayer online
In addition to the death arena and single-player campaign, there are also game modes such as flag capture or team deathmatch.

Quake 3 is a mythical 2000s game, released in 1999 on PC, Dreamcast, and PS2. Most importantly, it had delighted video game critics and satisfied many players, who continued playing it for years

This game has always been an icon for players. Therefore, many projects have then allowed playing it on other platforms
Later it was possible to play Quake 3 on Xbox 360, Nintendo DS, PSP and even iPhone
It makes sense that Quake 3 is also available on Raspberry Pi

In August 2011, a post appeared on the blog of Raspberry Pi showing this video, where we see Quake 3 running for the first time on Raspberry Pi

Since then, things have evolved and installing Quake 3 is no longer a scientific experiment
It has become relatively simple over time. As a result, we will see how to install it on your Raspberry Pi

Don’t expect something amazing, as the Raspberry Pi remains a miniature PC, and therefore its primary goal isn’t necessarily to run video games in 3D
But it’s a small project we’re proud to do on such a small computer, and I’m going to explain how you can do it

How to install Quake 3 on a Raspberry Pi?

There are 3 ways to install Quake 3 in theory, but the last one is not working during writing. So, I recommend to check for the Raspbian package first.

The installation from the desktop could have been straightforward, but there’s a little tip I must certainly give you

Confirm by entering your password (raspberry by default)
Quake 3 is now available in the main menu :

But if you run it now, it will not work due to the following error:

What you need to do to fix this error, is to open a terminal and run the following command:
game-data-packager quake3 -i

This command will download and build the missing files for Quake 3
It will take a few minutes to compile, but then the game will run properly
At the end of this command, return to the start menu, launch Quake 3, and you’ll get the menu:

From the raspbian repository

If you are more comfortable with the command line, it’s possible to follow almost the same procedure thanks to apt

All dependencies, like the game-data-packager package, will be installed automatically by apt

As in the first solution, this is not enough, and if you try to run the game now it will not work
So, you have to use the game-data-packager to download and compile the game’s files, using the following command:
game-data-packager quake3 -i

Let it run a few minutes, and you can finally start the game through the main menu or with the command :
quake3

The last method I propose (not the quickest) is to directly recover the source code of Quake 3 on the GitHub repository of the Raspberry Pi foundation
The link can be found here: https://github.com/raspberrypi/quake3

Note: This solution is not working currently (check this link), I keep the procedure here for information if it’s fixed, but you should better use the first ones

To complete this installation, you will need to follow these steps:

Woo, that was not so easy 🙂

How to play Quake 3?

Now that you’ve successfully installed Quake 3 by using any of these methods let me show you a few tips to get you started.

The first thing you need to know is that like any shooting game; you will need speed and accuracy. Often, with Raspberry Pi, we do not necessarily have the required equipment
I strongly recommend you to have a controller or at least a correct keyboard and mouse. It’s useless to play without the proper equipment; you will not take any pleasure.

Second thing, take a first look at the options to configure the game to match what you want
From the main menu, choose “Setup”, and you will then have several options:

Then start a single player game with the lowest difficulty mode, see how it works, and return to the options if needed

Remember that the Raspberry Pi is not a video game PC, so it may be necessary to review your ambitions and reduce the level of graphics to play optimally
On Raspberry Pi 4, it’s working pretty well, but on older models it was not the same thing 🙂

If you need a more step-by-step demonstration, I have recorded a video on the topic. You can watch it here if you want :

Check the RaspberryTips YouTube channel to receive new videos in your feed :

You now know more about Quake 3, how to install it on a Raspberry Pi using three different ways (choose the first or the second ^ ^), and how to configure it before having fun playing it

There are many old games available on Raspberry Pi (from different game consoles), which allow you to turn your Raspberry into a retro gaming console
Check this related posts if you are interested: