You have two or more Raspberry Pi at home?
You want to try putting them together to make a cluster?
You’re at the good place
When I bought my second Raspberry Pi, I immediately wanted to build one

How to build a Raspberry Pi cluster?
You need two or more Raspberry Pi (not necessarily the same models)
You have to install softwares on all nodes like MPICH and MPI4PY
And a good step-by-step tutorial to make this work: you have one 🙂

As it can be a complex topic for beginners, I’ll start by a little introduction on clusters in general
Then I’ll explain you what I have done and how you can do the same on your side

Basically, a cluster is a group of computers in a single entity
The goal is to make them work together, to improve the global performance
All the computers works on the same task, reducing the time needed to finish it

Don’t confuse computer clusters with load balancing
In a load balancing architecture, each computer is working on a different task to decrease the master node’s load
In a cluster, we take advantage of the total power of the cluster to run a task in parallel 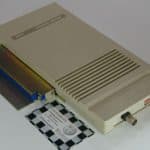 At the time I wrote these lines, the IBM Summit from the ORNL laboratory is the biggest supercomputer in the world
With over 2 million CPU cores and 3000To of RAM, and always increasing, it will be tough to compete with
Here is an illustration below if you want to know what it looks like

As you know, the Raspberry Pi is not so powerful, but it’s cheap
So it’s the perfect device to build a cluster
We can make it run tasks faster on 4 devices instead of only one, for a reasonable price

In this tutorial, I’ll show you how to build your first Raspberry Pi cluster
You can do it with two nodes to start and add others later if needed

I’m doing this exercise for you, with two Raspberry Pi:

As the preparation phase is long (compilation time mainly), I’ll do it on the 3B+ only to do this faster
Then I’ll copy the SD card to another to get a Raspberry Pi Zero almost ready without doing the same thing again
Finally, there are extra steps to do on both to connect them together and run the first script

If you have more than one node to add, repeat the same process for each node

And for the software, I’ll explain you this in the following parts

Note: if you have SD cards from different sizes, it’s not a problem
But you need to install the master on the smallest.
Otherwise, you’ll have an issue when flashing 64G image to a 16G SD card 🙂

We start as for any project, with the Raspbian installation
Download the Raspbian Lite from the Raspberry Pi Foundation website: link here
Raspbian Desktop is ok, but we don’t need a GUI for this project

Install it and boot for the first time (if you don’t know how to install Raspbian on a Raspberry Pi, follow my guide here and come back later)

You finished the base installation, we can move to specific software for this project

In short, this is what will allow us to run a script on several Raspberry Pi simultaneously

So you need to create three different folders, for example:

You also need to install Fortran before installing MPICH

We are now ready to start the MPICH installation process:

Once done, make a test to assure that everything is working well
To do this, run this command for example:

If you get the current date from the master, the MPI installation is done
Move to the next part

For the moment, MPI is available for Fortran and C scripts on your Raspberry Pi
But as the Raspberry Pi runs with Python, we’ll add Python capability to our cluster

For this, we need to install a Python library: MPI4PY

MPI4PY installation process is easy as it’s available with pip
But you need some dependencies before:

That’s it, move to the installation process

If this is working correctly, it’s good, your master installation is ready
MPI can now run Python scripts and we can start the nodes preparation

The next step is to duplicate the master’s SD card into other cards, one for each node
To do this, we’ll create an image from the SD card and flash it on the other cards

I didn’t test it so I can’t guarantee this is working, but dd should do the job

Once the image is ready, you need to create the SD card for each nodes of your cluster

If you prefer you can use Etcher to do this
I always use Etcher, but here we are already in Win32 Disk Imager, so it’s the same 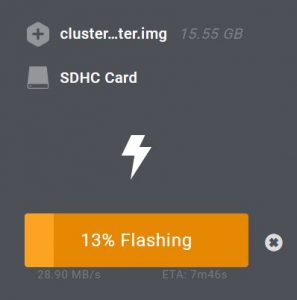 Again, on Linux, the dd command should do that too

At the end of this step, you have one SD card for each node you want to use
All the SD card contain the same image from the master we created before

If you want to use WiFi for one or more nodes, there is an extra step
For example, in my case I have a Raspberry Pi Zero, and it was easier for me to put it in Wifi

Once all the Raspberry Pi are started and plugged in the network, we need to get all IP addresses to use it later

You should now have all the nodes IP
If you don’t know the master one, you need to use this command:

The last step you need to do, is to note these IP addresses in a text file on your Master node

Do the SSH keys exchange

The last step is to allow the master to connect to each node via SSH without password
To do this, you need to create an SSH key on the master, transfer them to all nodes to allow it

That’s it, you cluster is ready. We’ll now test it

The cluster is now available and we’ll use MPI to run commands simultaneously on each node
As we already saw, MPI allows you to run basic commands and scripts through the cluster

nodesips is the file we created before with all IP addresses inside
And “hostname” is the command we want to run on each node
2 is for the number of thread to start, in this case change it for the number of nodes

As a result, you’ll get one line for each node in the cluster, with all nodes host names

If you followed this tutorial entirely, you should already have a test.py script on the home folder

You can test to run it on each node with the same command:

This will display “Hello” two times, once for each node

As you’d expect, we didn’t add MPI4Py just to run basic python scripts 4 times instead of one
MPI4PY is a Python library you can include in your scripts to use specific functions in your cluster

Here is a small example:

The goal of this script is to send data from one node to all the others
In this script data is defined only for the master (rank 0)
And then we send this data value to all others nodes with the broadcast function (comm.bcast)

When you run this script, all nodes and ranks display the same message

Can I add more nodes in my cluster now? You can add more nodes at any time to your existing cluster (that’s what they do with supercomputers). You just need to create a new SD card, follow the node configuration steps again for the new node and add the new IP address in the nodesips file

The IP addresses are changing each day, what can I do? Yes, it’s a problem. For the test I didn’t do this step, but if you want to keep your cluster you need to do this. Depending on your network, you can either set a reservation in your DHCP server (so each Pi will always get the same IP on boot). Or you can set manually a static IP address in your network configuration (I explain how to do this at the end of this article)

For what kind of usage do I really need a cluster? In this tutorial, it was mainly the technology and the installation process that interested me. Not much the possibilities that are now opened to you with this cluster. This is another topic and I can’t fit all in only one article. If you want to go further, you can find more projects about clusters on Hackaday

That’s it, you know how to build your own Raspberry Pi cluster from two nodes to an infinity 🙂

I hope you’ll like that too
If you have any questions or experiences to share, leave a comment below
I would like to know what you do after this first step in the supercomputer world 🙂

24 thoughts on “How to build your first Raspberry Pi cluster?”

link to What's the Difference Between a Raspberry Pi and a Computer?

Over the past five years, the Raspberry Pi Foundation sold 12.5 million single computers worldwide. The popularity of this device has been steadily increasing over time and more and more people are...

Continue Reading
link to Can you Use an iPad as a Raspberry Pi Monitor?

Sale: 10% off today.
I'm here to help you getting started on Raspberry Pi, and learn all the skills you need in the correct order.

Yes, I want to improve