In the computing history, Raspberry Pi has now clearly left a trace
And this is an incredible story, from a guy building single board computers for his entertainment, to a major foundation selling over 15 million devices in the world
I’ll try to sum up this evolution today for you

What’s the Raspberry Pi history?
The Raspberry Pi story started in 2006 with the creation of the first prototypes inspired from the BBC Micro.
6 years later, the first Raspberry Pi was born.
The main goal was to help young people to discover computers at low cost (about $30)

Now I’ll try to give you all the needed information to understand the Raspberry Pi history: origins, development, key dates and results

Who is Eben Upton?

Eben Upton is a British engineer, creator of the Raspberry Pi and the Raspberry Pi Foundation
He studied physics and engineering at the Cambridge university
Then he worked for prestigious companies, like Broadcom, Intel and IBM

Eben Upton worked five years from 2006 to 2011 on a single board computer project (mainly on evening and weekends, while working at Broadcom)
The BBC Micro from Acorn computers he had used at school, inspired him to create his own product
But as you can see below, it’s not a copy/paste:

On his side, Eben Upton was working on a smaller and cheaper device
He worked first on big boards to make tests and debug easier, but the goal was to create a small computer at the end
Here is a photo of one of these first prototypes:

Moving to the Raspberry Pi idea

While Eben Upton was creating his prototypes, he realized that there was an education problem in the UK, with high prices for computers
That implies that young students didn’t learn computer sciences, turned away from the computer professions, and companies in the UK lacked computer professionals

If you’re a young reader, I remind you that in 2006 we were at the beginnings of the Internet that we know today:

So the world needed many programmers and network engineers to continue the Internet development
Eben Upton tries to find a solution, with the goal of building a computer ten times cheaper than the BBC Micro

If you are interested in knowing more about Eben Upton and the story of the Raspberry Pi origins, I recommend watching this video from the Centre for Computing History:

Do you know why we call the Raspberry Pi like this?

Many computer manufacturer’s names come from fruits, and it’s the same for Raspberry
Before Raspberry Pi, we already had Apple, Acorns and Apricot computers
So it was mainly to follow the trend, but also a funny reference to the expression ‘blowing a raspberry’
Eben Upton said it was an allusion to the project nature at this time

He could have created a classic company and sell the Raspberry Pi for $100 to make money, but his main goal was to help people and solve a problem

As I already mentioned it previously, the main goal was to release computers around $30
This should help schools teaching computing and allow students to be interested in jobs of this field of activity

You can check the Raspberry Pi blog to read stories about the foundation achievements (link below)
Since the beginning, the main goal stayed the same, but with a worldwide mission now
Here are examples of the success they got:

You can check this page to learn more about this 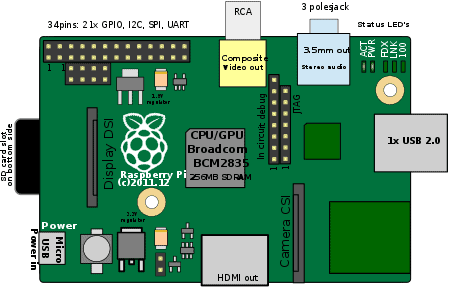 The Raspberry Pi A is not the first model released, they revealed it on February 2013, one year after the B
As I said, they intend the model A to be cheaper, the first version will cost about $25
They got this price by making choices on hardware components: less USB ports and ram for example
But the Raspberry Pi 1 A remains interesting with these specifications:

In November 2014, they released an update (1 A+), with some changes on the hardware, mainly: 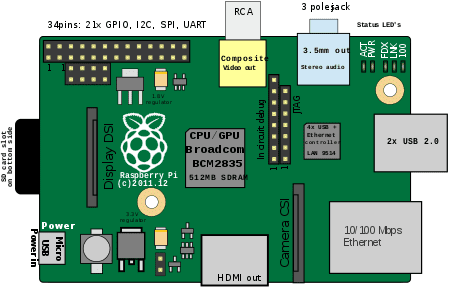 The Model B is a more “powerful” Raspberry Pi model, if we can say so, for a $35 computer

As I said, it was the model B that came out first to the public
On the 29 February 2012, The Raspberry Pi Foundation released this UFO on the computer market

For the first time we saw a 85x56mm single board computer with:

This was not that different from the current computers in the market, but it costed 10 times cheaper
It was immediately a success with 500,000 sales in the first 6 months
And it was only the beginning of the story

As for the model A, they released in July 2014 an update with the same changes:

And they also move to 4 USB ports, giving it more possibilities out of the box

Then the version 3 of the Raspberry Pi B was born in February 2016
It’s basically the same board as the Raspberry Pi 2B 1.2, coming a few months later
But with the addition of wireless possibilities, with Wi-Fi and Bluetooth integrated directly on the main board

Finally, in March 2018, the Raspberry Pi 3 B+ comes out with two improvements:

By the time I was writing this post, it’s the most powerful Raspberry Pi on the market
So if you need speed and power in your projects, buy a Raspberry Pi 3B+ ( the best CPU, more RAM, faster network, …) 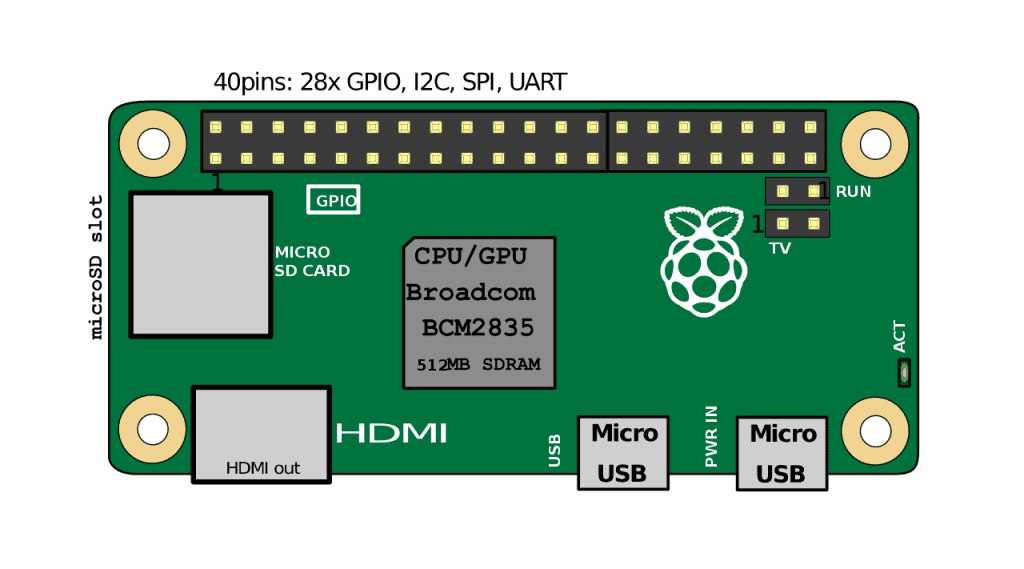 The last model from the Raspberry Pi catalog is the Pi Zero
It’s the smallest Raspberry with 65 mm long and 30 mm wide (about half of the B model)
It’ll be your perfect companion for traveling, pen testing or limited size projects

The first “Zero” model was released in November 2015
The main event was the size of the board, but it comes with these specifications:

In February 2017, the Raspberry Pi Zero receive an update, with a wireless card (Wi-Fi and Bluetooth)
It’s also the first version with a camera port built in

You could also find the version WH in your favorite reseller
This changes nothing on the specs, the only difference is the pre-soldered GPIO header
If you plan on using GPIO pins, it could help you start faster

The Raspberry Pi Zero W (or WH) is not really as cheap as $5 because you can’t do anything with only the board
But if you intend to create projects with a minimal wiggle-room, you can buy the Vilros kit on Amazon.com
I bought it recently and I’m happy with it, easy to start with all the needed cable and adapter

Even if the goal of the Raspberry Pi is not to make money with this product, we can’t ignore the successful history of the device in a sales point of view
Many computer brands should be jealous of these results

As I said they sold 500k Raspberry Pi in the first 6 months, 2 millions one year after, and they are now close to 20 million devices sold
It’s a rhythm of 3 million sales a year
To give you an idea, Apple sold 20 millions Mac in 2017, it’s not that far, and Raspberry Pi is on a niche market

Here is a graph of the total sales progress since the beginning of the Raspberry Pi story: 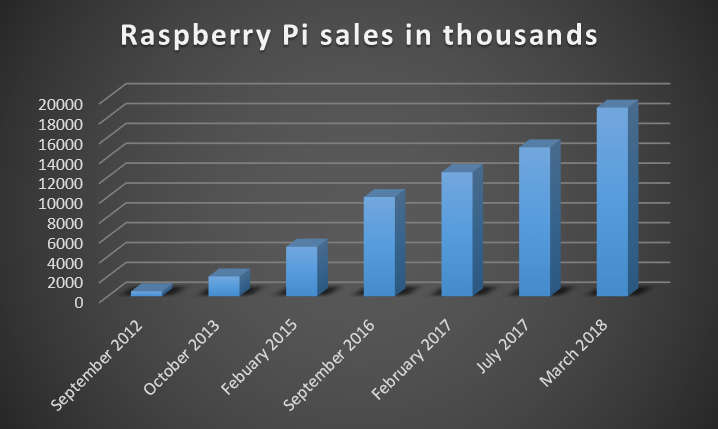 If you want the exact numbers, here is what I have found:

It’s the total sales since the beginning, not a year result

And for those who are preparing a presentation or just want the essential information, here are all the key dates to remember about the Raspberry Pi story:

We already saw the amazing story of Eben Upton and the Raspberry Pi Foundation, starting from 0 to 20 million sales in six years
But before ending this article, let’s take a moment to see how much space the Raspberry Pi took in our everyday lives, internationally (and beyond ^^)

The main goal of the Raspberry Pi creation was to bring back computing at school, for education of young people
Was it a success? Probably
Is it measurable? Not sure

We know that there were donations, like the 15,000 units I wrote about before
We know that many teachers have bought Raspberry Pi for their classes
Either way, Eben Upton should be proud of his work, helping many people worldwide learning how computers work and discovering programming thanks to him

There are many applications at work for a Raspberry Pi
Many companies can use it to collect data, display things or monitor something
I can even imagine a backup VPN server, a customer counter in a store or a monitoring node on a small remote site
You don’t need a $500 computer or server for this kind of projects, just something stable with a network connection and Linux on it

For example, where I work, I put a Raspberry Pi somewhere to control the real Wi-Fi connection speed available for users
No server could have been used for this, wirelessly connected at the exact place I wanted it

In Mr. Robot for example, the main character is a hacker and uses the Raspberry Pi small size to introduce it in a company he wants to hack

It’s really close to what security companies are making nowadays.
Raspberry Pi is a great tool in pen testing for example.
If they manage to put a Pi Zero on the target network, it could be hard to find for the target company, and the best option for the hacker to get control of the network

There are also Raspberry Pi in space, inside the International Space Station (ISS)
Scientists can use them for various projects

For example, in 2018, the Raspberry Pi foundation allowed schools to run their code in space, aboard the ISS
You  can find all details in this blog post

I think that today, the first strength of the Raspberry Pi is its community
With the Internet democratization and the social networks, the fame of this product spread naturally

When the Retropie system was revealed to the public, everyone wanted a retro-gaming computer for less than $50 at home, and they bought a Raspberry Pi
When Michael Teeux published his “Magic Mirror” concept, the buzz created with his project must have created a peak in the Raspberry Pi sales
Everything is possible and any new idea with a Raspberry Pi helps the Foundation to sell devices, and then lead various projects

As this is a big subject, and I simplified the content of this article, I’ll give you some links if you need more details
Here are interesting pages about Raspberry Pi:

link to Can you Use an iPad as a Raspberry Pi Monitor?

For most people, the Raspberry Pi operating system (whatever the one you use) will do this in the background, and it shouldn't be an issue.But in some cases, like if you are just getting started on...

Sale: 10% off today.
I'm here to help you getting started on Raspberry Pi, and learn all the skills you need in the correct order.

Yes, I want to improve