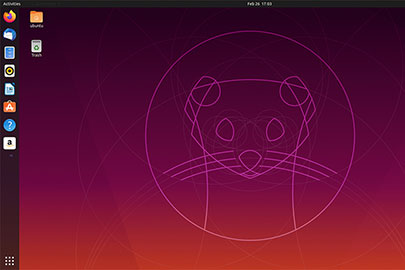 Ubuntu is my favorite Linux distribution on PC, I’ve been using it for years (even if recent desktop styles don’t suit me)
But on Raspberry Pi, it has always been complicated. I don’t know why, but I never managed to install it properly
I tried again this week, and good news, almost everything works fine
So let’s review this famous operating system!

How to install Ubuntu on Raspberry Pi?
Ubuntu for Pi is available directly on the Ubuntu official website
It’s only the server version, but you can install a desktop package after that
The installation process is straightforward:
– Download the latest Ubuntu image
– Flash it with Etcher
– Start your new system!

In this post, I will do a quick reminder about Ubuntu (if needed), then show you how to install the Server version, and how to upgrade it to your favorite Desktop environment (Gnome, XFCE, LXDE or KDE)

I don’t know if it’s really necessary to do this, but for those who don’t know Ubuntu or need a quick reminder, here it is

Ubuntu is a famous Linux distribution, based on Debian
It’s commonly used by most PC users on Linux, but also on an increasing part of the servers in the world (39.1% according to W3Techs)
Ubuntu is an African word that means “humanity” or “humanity to others” from the Canonical translation

This distribution runs on a shorter development cycle and therefore provides the latest news much earlier than Debian
So, it’s perfect for a desktop system

Mark Shuttleworth, a South African billionaire, launched the Ubuntu project in 2004
The goal was to create an easy-to-use alternative to Debian
He created the Canonical company the same year, to manage this project

The first version was released on October 20, 2004
Since that date, Canonical releases a new version twice a year: in April and October
We’ll see that now in details

On Ubuntu, versions publish numbers, dates and code names set like a clock:

After this short introduction, let’s move to the installation part!

On Raspberry Pi, there is only the Server version available
But you can install a Desktop environment later, and I will show you how

Here is the download link to Ubuntu Server for Raspberry Pi
During writing, it’s available for Raspberry Pi 2, 3 or 4 with two versions: Ubuntu 18.04.4 LTS and Ubuntu 19.10

Choose the one you prefer in the column corresponding to your Raspberry Pi model and click on “Download 32-bit”
For information, I’m writing this post while testing on my Raspberry Pi 4 and Ubuntu 19.10

Now, you need to flash the SD card as usual
I recommend using Etcher to do this, as it’s very intuitive:

After a few minutes, the SD card is ready to use!

From here you arrive at an almost empty system, with many packages missing
Yes, it’s the principle of a minimal version, but I like to have at least the basics 🙂

If you plan to use Wi-Fi on this installation, it’s almost impossible to configure it right now
So, I recommend starting with an RJ45 cable if you can
If not, check the next paragraph to know what you need to configure

Once connected to your network, the first thing to do is to update the system:
sudo apt update
sudo apt upgrade

Note: if like me you don’t have a QWERTY keyboard, you can edit the /etc/default/keyboard file and set the XKBLAYOUT option to fit your hardware

Here is how to configure the wireless connection on your Raspberry Pi with Ubuntu Server
If possible, I recommend doing this from your computer by using SSH, so you can copy and paste the commands and configuration

Anyway, here is what you need to do:

From here, there is no big difference with a Raspbian Lite system
You can use the classic Linux commands to manage your device (except the Raspberry Pi ones, there is no raspi-config on Ubuntu)

In the next part, I will show you how to upgrade this Server version with a Desktop interface
I just need to inform you that I didn’t manage to have Wi-Fi working in Gnome, so if it’s your only available connection method, it’s probably better to seek a solution before (I give you a workaround in the next part, but it’s not perfect)

The main benefit of using Ubuntu rather than Raspbian is the Desktop interface, so let’s look directly how to install it on Ubuntu Server

If you want to install a desktop environment, you have to make a choice between 4 alternatives:

It mainly depends on your tastes, so I’ll let you choose the one you prefer
But on a performance level, LXDE and XFCE are probably faster than Gnome and KDE
If you have a Raspberry Pi 4 with 4 GB RAM, it’s probably not a big deal, but on older models, it’s something to consider

For each desktop environment there is a specific meta package to install:

To install it, use apt:
sudo apt install <package>

In my case, I’m a player, and I choose Gnome with all default packages:
sudo apt install ubuntu-desktop

After the reboot, the login screen shows up
Choose the Ubuntu user and enter the same password you have set on the Server version
The desktop appears

The interface is not very responsive on Gnome, but it works pretty well anyway
And I suppose it’s probably better on XFCE without all the default packages

If I had to update my post “Can a Raspberry Pi really Replace your Desktop PC?“, it’s probably the system I would choose for this

As I told you previously, the Wi-Fi is not working with the Desktop interface
I don’t understand why, probably because Network Manager is not compatible or something like that
There is probably a solution as this is working without the interface, but I didn’t find it

The only way I managed to get Wi-Fi working is by using a USB dongle
As it was not working with all my Wi-Fi adapters, I give you the reference here if needed
It was my Dlink USB adapter (this one exactly) that was the only working

Once detected, you can configure the Wi-Fi settings from the network icon on the top right of the desktop (pick a SSID in the list and follow the wizard)
Let me know if you find another solution, I would edit this part

Ubuntu is one of the most used systems in the world, so you’ll find help effortlessly on Internet
But just to get you started:

That’s it for this quick review of Ubuntu on Raspberry Pi
I really like this system, and it’s a good alternative to Raspbian if you are using your Pi as a Desktop PC

I didn’t have time to make more tests with GPIO, I think the basics should be OK, but I’m not sure that everything would work (I didn’t find any package for the Sense HAT for example)
Let me know if you have some experience about that