Do you want to build a home security system? ZoneMinder is the perfect tool to have to control the cameras.
As I know some of you are interested in this kind of project, I looked for a solution, and have found that ZoneMinder is a pretty good tool for this.
But the installation is not straightforward, so I’ll explain everything here.

How to install ZoneMinder on Raspberry Pi?
The ZoneMinder package is available in the Raspberry Pi OS default repositories, so it can be installed with apt.
It requires many dependencies, so you also need to install and configure Apache, MySQL and your cameras separately.

After a short presentation of the project, I will show you how to install the server part on your Raspberry Pi, and how to configure a camera (or more) in the web interface.

As I told you in introduction, ZoneMinder is an open-source CCTV solution.
So typically, you can use it for home security, baby monitoring or many other things with cameras.

It’s a totally free solution, that you install on your systems, so you keep control on your data. That’s the main difference with other solutions, that are cloud based in general.

ZoneMinder is not officially developed for the Raspberry Pi, but the source code is available and a package is present in the default repository, so there is no compatibility problem.

As I explain at the end of this post, you can probably use the camera module directly in ZoneMinder, but I didn’t find the solution quickly, so I have a workaround detailed in this post.
Also, any old webcam you have with a USB port can be easily recycled as a network camera with a Raspberry Pi.

ZoneMinder is available in the Raspberry Pi repository, so we can expect an easy installation, right? Not really 🙂
ZoneMinder requires a web server and a database server, that you need to install and configure before using it.
The package will come with the clients packages, but the server has to be done separately.

Let’s see how to install everything!

You don’t need many things to start this project, but here is the stuff I have to experiment this (with links to Amazon if needed):

Also, I don’t have one yet, but I think a touch screen monitor could be a good add-on to this project if you want to keep it running all time.
The official touch screen display and a screen case should be perfect on your desktop or bookshelf for example 🙂

We’ll start by installing the servers.
For the web server, you can install Apache or Nginx. I chose to go with Apache, that I know better, so I’ll show you how to do this.
For the MySQL Server, it’s now MariaDB on Debian and Raspberry Pi OS.

Confirm the installation by pressing “Y” when apt asks for it.
That’s it, now we need to configure it.

By default, on MariaDB the root user can connect without any password.
But to do this correctly, we’ll create a new specific username for ZoneMinder:

That’s it, user created and database ready to use.
If you want, you can test the connection with:
sudo mysql -uzoneminder -p

We can now add this user in ZoneMinder configuration:

In theory, the only change is probably the password.

Also, you need to fix the permissions on the configuration file like this:
sudo chgrp -c www-data /etc/zm/zm.conf

The last step with the database is to create all tables in the database:
sudo mysql -uzoneminder -p<yourpassword> zm < /usr/share/zoneminder/db/zm_create.sql

It should be ok with the MySQL part now.

Next step is the Apache configuration, it’s much more straightforward 🙂

That’s almost done, there is a quick fix I’ll give you later, but Apache is ready!

You should now be able to start the service for ZoneMinder:

You’ll not be able to access the ZoneMinder interface if you didn’t set the time zone correctly on your Raspberry Pi and PHP configurations.
I got this error the first time I tried:
ZoneMinder is not installed properly: php's date.timezone is not set to a valid timezone

Here is what I have done to fix it:

Then, you can add it in your PHP configuration:

It should be ok now. In any case, it fixed this for me.

Before going further, I want to give you a few extra information about the installation part.
ZoneMinder has a pretty good documentation for the product (that you can find here). There is nothing for the Raspberry Pi, but I almost followed the Debian tutorial to install it on Raspberry Pi, and it works.
They also have a forum and a Slack support channel if you need any help about this part.

Also, there are Docker images available in this documentation if you are interested.
I’m not a big fan of Docker, so I didn’t try it, but If you want here is the link to the installation guide.

Ok, so ZoneMinder is installed, cool. But we don’t have any camera yet in the interface 🙂
Let’s see how it works, and we’ll add some in the next part.

ZoneMinder doesn’t seem to handle the Raspberry Pi Camera locally (or at least I didn’t manage to make it work, there is probably a workaround).
So, you have at least two options to add new cameras:

In my example, I’ll show you how to do this with Raspberry Pi cameras, but it’s even easier with classic IP cameras.

In the ZoneMinder Console

Just before installing the camera, here is how the interface works.

For now, when you access the web interface, there is nothing in it.
You will need to add at least one camera.
You can click on the ADD button to do this, and a form will show up with all the options you can configure for this camera.

ZoneMinder calls a camera a monitor, and you can configure many things as:

I’ll now show you how to install a Raspberry Pi Camera Module, and add it in ZoneMinder.
If you have an IP camera, you can jump directly to the last step.

Start by connecting your camera to the Raspberry Pi if not already done, the connector is near the HDMI or Micro-HDMI port: 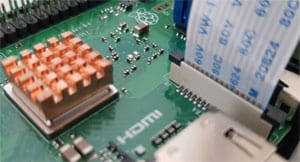 Go to “Interfacing options” > “Camera” and enable it.
Exit raspi-config and reboot the Raspberry Pi.

After the reboot, you can check that the camera is working with:
raspistill -o image.jpg
A file is created in your current folder that you can open to check that everything is good (on the Desktop version, the image shows up on your screen).

If you have any issue with this, please check my tutorial on how to install a camera on Raspberry Pi, this is not the point of this post.

The next step is to install Motion. Motion is a service you can run on Raspberry Pi to create a network stream with your Raspberry Pi camera module.
That’s exactly what we need for ZoneMinder, and it’s not so complicated, so it was my strategy to have two network streams for my cameras:

Once Motion is running, just check that the camera is accessible directly in your web browser.
By default, it should be something like:
http://<RASPBERRYPI_IP>:8081

If everything is good, move to the next step.
If not, you can stop motion (use CTRL+C) and edit the configuration to fix what is wrong.

Add the camera on ZoneMinder

Now that the video stream is available, you can go back in ZoneMinder and add your monitor:

That’s it, a few seconds later your camera should appear in the list in “Capturing” mode.
By clicking on “Montage” in the main menu, you can have a complete overview of your camera images.

After staying on the screen maybe 10-15 minutes, I got an error like this one:
Unable to connect to ZM db.SQLSTATE[HY000] [1040] Too many connections

I don’t know exactly why, maybe there is a problem with my configuration (100 simultaneous connections is high for two cameras!).
But I fixed it by increasing the maximum connections in MySQL:

Refresh the page with ZoneMinder, should be ok now.

Well done, it was a not so simple tutorial to follow I think but if you are here, it’s a success 🙂
You made the good choice, keeping control of your data and know how the system works is essential nowadays.

This installation mix a few notions I already explored on the website, so feel free to check this related posts if you need more information:

Grab your free PDF file with all the commands you need to know on Raspberry Pi!